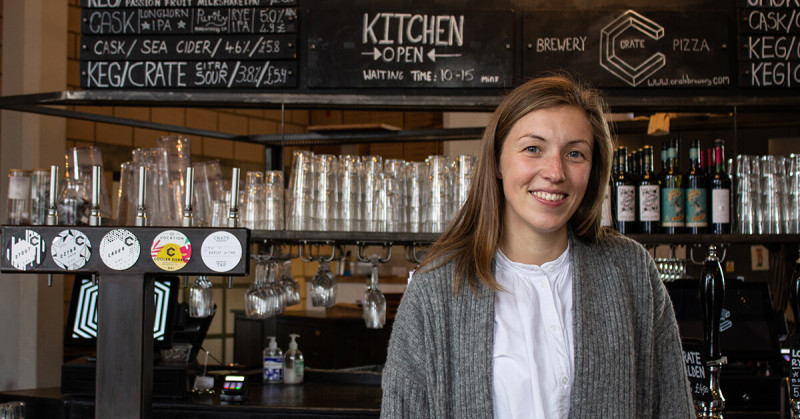 They say a lot can happen around a crate of beer. For Tom, Jess and Neil, Founder Directors of Crate Brewery, this sentiment is central to the brand they started building in 2012. We caught up with Tom Seaton, founder director, and Jen Thompson, Head of Finance, to hear Crate’s impressive growth story and their exciting plans for the future.

Meeting in a bar over a few beers and a couple of pizzas, the founders realised they shared a love for both of these things and wanted to make their own. Less than two weeks later they had signed a lease on Hackney Wick’s iconic White Building, the space Crate Brewery still calls home today.

The White Building was derelict when they took over the space and the 2012 Olympics were in full swing. The brewery, bar and pizzeria were built with the help of the local creative community, collaborating on a unique canal-side venue that reflects the creativity of the area.

“For us, Crate is all about making great ideas happen,” says Tom. “It’s a place where food, music, art and beers come together.”

Fast forward to 2019 and Crate has a second (much bigger) brewery and distribution warehouse onsite. They produce 1 million pints of beer each year and make an impressive array of pizzas every day. Just 7 years on from opening the business, they’ve self-funded their growth to nearly £5 million.

“For a small business, we’ve had a lot of quite amazing wins recently,” Tom tells us. “We launched into 1500 Tescos last year and we’ve just brewed our 1000th beer.”

Selling into Tesco has been a massive step for Crate Brewery, allowing them to distribute their signature range of lagers and IPAs across the country.

“It’s a little bit of a risk going into such a big supermarket,” Jen explains. “You never know what your rate of sale is going to be. We went into 1500 stores which is unheard of for a brand of our size, especially going in for the first time. From a business point of view, trying to keep up with that demand and making sure we have the infrastructure in place to be able to supply someone like Tesco is a big thing.”

Keeping up with demand

Crate Brewery increased production hugely to fulfill their Tesco orders but then had to wait up to 60 days to be paid. This put a great deal of pressure on cash flow. There were a lot of upfront costs for raw materials, packaging, staff and so on but most of their working capital was getting tied up in outstanding invoices.

With demand for their beer greater than ever before, they knew they’d need funding to keep up. Familiar with invoice finance, the team at Crate Brewery understood that this kind of solution would cater to their specific needs. They had initially approached their bank but were hesitant to take on the whole-ledger facility they had been offered. Crate started looking into alternative providers that could offer greater flexibility and that’s when they found MarketInvoice.

“The amount of beer we had to produce and the amount of money that was tied up in individual orders for Tesco meant that we needed some significant working capital,” Tom recalls. “MarketInvoice were able to give that to us really quickly and easily in a flexible way.”

As Head of Finance, day-to-day management of Crate Brewery’s invoice finance facility lies with Jen. Because they have a selective facility, she can simply login to the MarketInvoice platform and fund invoices as and when they need to.

“Using the platform has been great,” says Jen. “It’s very straightforward. Our account manager, Jason, is also very responsive. If we haven’t loaded anything for a while, he contacts me to ask if everything is okay and whether we need a hand with anything.”

Having funding in place gives Jen peace of mind knowing they can confidently fulfill their commitments to Tesco without having to worry about cash flow.

Investing in the future

So what’s next for Crate Brewery? Tom and the team have some pretty ambitious growth plans:

“Earlier this year, we launched on CrowdCube where we invited members of the community to come and be investors and shareholders in Crate Brewery with us. The raise has now closed and we’re excited to say that we exceeded our £500k target, reaching £937k in total!

Phase one of our plans for the investment is already underway; we’re redeveloping The White Building. We’ll be opening a secondary restaurant in conjunction with Silo, one of the UK’s first waste-free eateries. We’re also redeveloping our brew space to build in a pilot kit that will allow us to produce some of the most innovative beers going.”