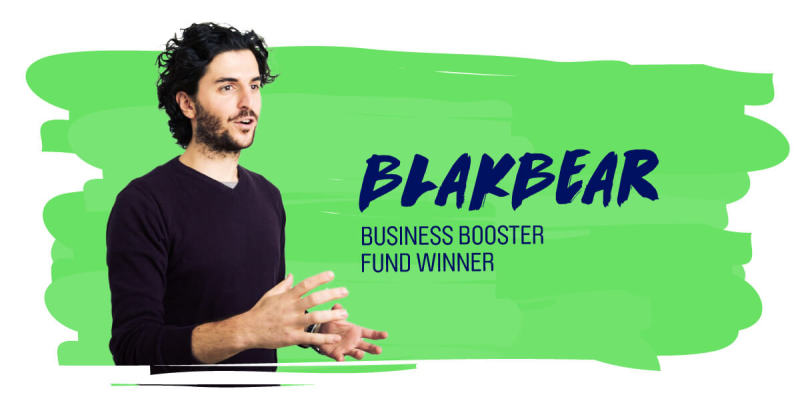 Last year we wanted to do even more to support entrepreneurs, beyond setting them up with business finance. So we decided to launch our Business Booster Fund in December as a way to give ambitious British businesses a helping hand. The winners each received a cash grant and the opportunity to sit down with the top brains at MarketFinance for advice on anything from financial planning to marketing.

One of our winners is BlakBear, a truly innovative business that blew us (and the public) away. The company produces sensors that use microbiology to determine the true freshness of the food in your fridge in real time. With the average household chucking away £700 worth of food every year, any technology that could minimise waste is fantastic news in our book.

In a year where we’ve overbought to avoid unnecessary trips to the supermarket, more food has been spoiling than ever before. Every year in the UK we throw away 4.5 million tonnes of surplus food. Tackling food spoilage would be safer for consumers, better for the environment and kinder to our wallets. The technology that Michael and the other scientists at BlakBear have developed has the potential to be industry changing.

As consumers, we have very little information about the state of our food. We have sell by dates and use by dates, but that doesn’t factor in food spoiling for any reason other than time. “You could leave something out for hours, and the expiration date won’t change,” Michael explained. Use by dates are only useful as a guide.

“Our noses help us tell if something has gone off, but there’s more to spoiled food than just scent”, he continued. A lot can happen to food that we can’t necessarily see in an unopened packet before we buy it. “Currently supermarkets can measure the conditions around the product which may cause spoilage, but you’re not measuring spoilage directly from food”, Michael explained.

After a product has been prepared and packaged, the internal contents are no longer directly monitored until you have it at home. BlakBear has created a sensor that goes in a sticker that’s incorporated in food packaging. It detects ammonia, the gas released by perishable foods as they start to go off. Sensors have also been fitted to foodboxes that you can use to check the freshness of any leftovers you store in them. So no more reheating the lasagne you made last week and hoping for the best.

The sensor is more than 100 times better at recognising the gas than the human nose. The sticker also has a chip that you scan with your smartphone at home. It’s linked to an app that gives a more accurate idea of shelf-life with ease. The sensors in at-home boxes and smart labels are smart, effective and have the potential to roll out on an enormous scale.

A gap in the market

Michael and his colleagues were initially a research and development company making gas sensors. Then one day they saw an opportunity in the food industry. “We wanted to apply this tech to solve the big problem of food waste”, he told us.

They’ve been working on the technology for about five years and have since seen outcry against food waste grow. “It’s a big thing to solve”, he said, “food can become more efficient with technology”. They started with the technology they wanted to apply and then developed it by asking questions to their target customers. “We wanted to create a product that solves a problem”, Michael stressed.

Fast forward to 2021 and BlakBear is improving food safety through the freshness of packaged food and helping to reduce waste across the supply chain. “We’re trying to solve spoilage in the first stages when food is produced or transported, but also at home, where most food waste is generated”, Michael told us.

A product shaped by its customers

We asked Michael’s advice for budding entrepreneurs who are looking to find the right funding and opportunities. “We got out there. We tried to take part in conferences, reached out to industry leaders, big producers. We really tried to understand what their problems were and how we can solve them”, he told us.

They want to provide freshness visibility across the lifecycle of prepared and packaged food that we buy. To start, they’ve identified the biggest need at the beginning and the end of the supply chain (i.e. at home). So on top of using their sensors in supermarket packaging, their ambition is to have the technology in our fridges. “We are developing food boxes to go in fridges already and will be testing them with consumers this winter”.

They raised their profile by publishing scientific papers and articles, along with doing media interviews. With a wider reach they were able to get the go ahead for industry pilots and ultimately gain more legitimacy and build the right contacts. They’re working with fridge makers and trusted kitchenware manufacturers to deliver on their tech.

Entrepreneur networks have been key to their success, according to Michael. Meeting other business owners, listening to their experiences, getting noticed and building relationships has been vital. Going to events, and even just heading to Google has led them to opportunities.

“We’re always looking for funding, always proactively searching”, he told us. They found our Business Booster Fund online that way, and that has certainly paid off. For entrepreneurs, network is key.

Coming to a fridge shelf near you

So what’s next? 2020 gave BlakBear time to develop their strategy and business plan. They have organised consumer trials for later this year and hope to continue in the UK, US, Europe and Asia. The ultimate goal is developing a consumer product that households across the world can benefit from.

“We want our technology to be the freshness standard across the supply chain,” Michael enthused. People understand the product but they still need to prove it’s the best and, crucially, makes commercial sense. And with new delivery models and producers facing more scrutiny, assuring food freshness is more important than ever.

We were so excited by what Michael and the team at BlakBear do. The technology is innovative, clever and has the potential to be universal. We wish them the best of luck in the next stages and look forward to benefiting from the technology in our everyday lives. And no more hoping for the best with the food in our fridges!

You can find out more about BlakBear and their revolution in food safety on their website here.