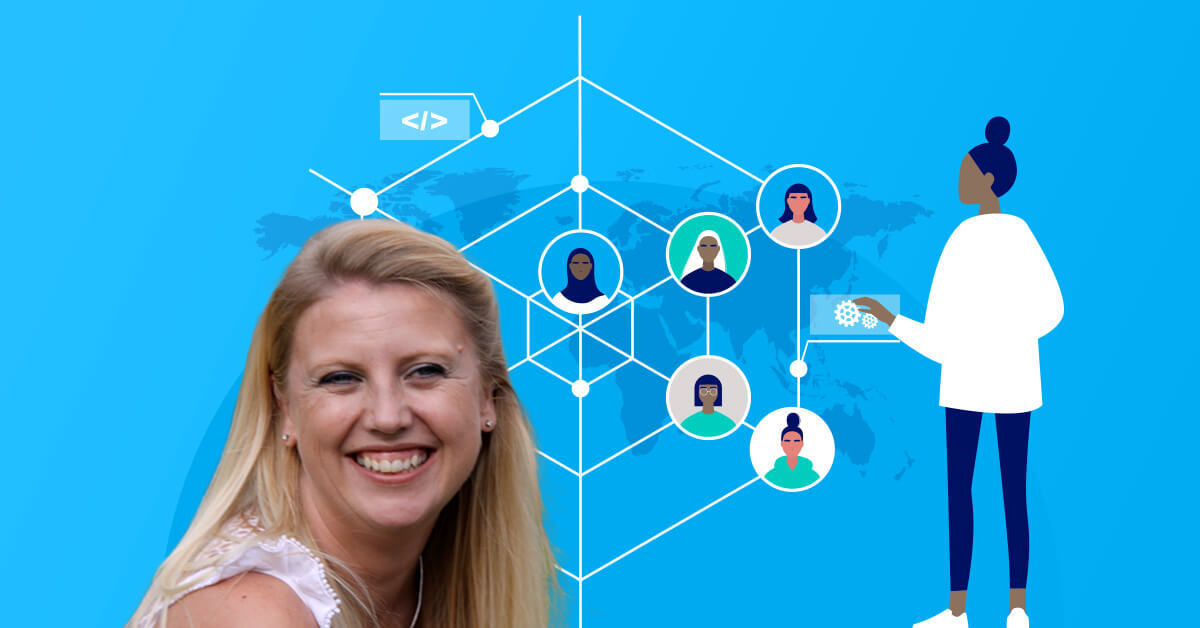 To mark International Women’s Day, which falls on Monday 8 March this year, we wanted to shine the spotlight on our Chief Risk Officer, Jenny Holt. With an impressive and dynamic career that has spanned continents and different sectors of finance, we were thrilled when she decided to join the MarketFinance team last June.

Jenny has built a successful and ambitious career in a typically male-dominated sector, working hard for her achievements. Starting out with a brief stint in sales, she quickly realised she was perfectly suited to an analytical, data-driven role in Risk at Abbey National (now Santander). But it was her 11 years at Barclaycard that really let her grow as a professional. There, she “learnt to think bigger, expect more”, and was managing teams across the world, moving country or working unconventional hours.

Although our time together so far has been all but virtual, Jenny quickly made her mark on the Risk team and more widely with her animated personality. Her role as Chief Risk Officer is fairly fluid (this is Fintech), but generally she makes sure that our book is balanced and strong, so that we can serve as many businesses as possible at the right price. Reflecting on her career so far and the lessons she’s learnt as a woman in finance, Jenny offered us some wisdom and advice for women looking to succeed in the workplace.

Never forget the importance of networks

As someone who loves variety and embraces new challenges, Jenny’s adamant about the power a supportive network has in creating these for you. She’s stayed in touch with people she’s worked with across her career and is a committee member of Women in Data. “They’re a group of amazing, strong, fierce and successful women that can relate to a lot of the same challenges”, she explains.

In fact, it was through one of her friends that she was put in touch with us when we were hiring for her role. But it goes beyond job opportunities: a strong and supportive network has never been more important than through lockdowns and all the challenges of the past year. If there’s a problem she can’t solve at work or there’s a tricky decision she’s toying with, the women she’s met professionally are there to listen and offer advice. “When I think about what I’ve achieved through my network, I can’t imagine being without them.”

Variety and learning will take you far

When Jenny started at Barclaycard she felt out of her depth and challenged in a way she hadn’t for a long time. But the experience didn’t deter her. In fact, she says “it made me think bigger”. She learnt to expect more from her career and development, and in her own words, became more ambitious. Staying in a comfortable position has its perks, but “I’m very driven by learning and development”, Jenny explains.

She puts a lot of her success down to the breadth of experience she’s had and the different environments she’s worked in. Being able to see ambition in others can boost your own enthusiasm, and it’s something she thinks everyone should try to get a taste of. Using the success and achievements of those around her as a positive motivational force helped her carve out her own.

It’s all very well wanting to be paid more, be promoted and update our LinkedIn with new job titles. But what’s mattered most to her has been the experiences she’s had. That’s where she’s found knowledge and learning, and that’s what’s taken her career further. “I’m very driven by learning and development”, she stresses. Essentially, focusing on what you’re learning, and what you can do with it, counts for more than being paid 5% above last year. #AlwaysBeLearning is one of our core values, too, so we couldn’t agree more.

Play to your strengths, not your weaknesses

Despite being in leadership roles for years, Jenny says she's still “learning not to beat myself up, not to be tough on myself and give myself a hard time when I don't do everything perfectly”. It takes work and time to become aware of your strengths and how to use them effectively to your advantage. But the moment you stop over analysing yourself and trying to be more like your male counterparts, Jenny reflects, is when you can really succeed.

For Jenny, it’s important not to focus on your weaknesses because what sets you apart from others can often show your value. Succeeding comes from knowing how to use your differences and having the confidence to do what you’re good at in a way that you know works best for you.

“It was only as I got older", she explains, "that I appreciated that cognitive diversity is a good thing”. For many women, especially in male-dominated fields, it can be hard to notice the value of your skills if they don’t align perfectly with the established framework. Finding the value in a different way of working or thinking will take you far.

Make sure you have a voice

Much of Jenny’s move into Fintech had to do with wanting to learn new things and take on different challenges. Her career has been based on exactly that, and it’s served her well so far. Now she’s in a less traditional environment and is removed from the corporate world she’s been part of for her whole career. But what does being the first female executive in a company feel like?

At MarketFinance, Jenny says she really feels she has a share of the voice. She doesn’t experience the same characters that she used to at more traditional banks. She would frequently encounter men trying to make themselves look good in meetings, who were more focused on taking over the entire allotted time to boost their own position. Now she thinks she’s in a place where everyone around the table is trying to do the best thing for the company, not their egos.

We look forward to seeing what Jenny can do at MarketFinance and for all the ambitious people on her team!