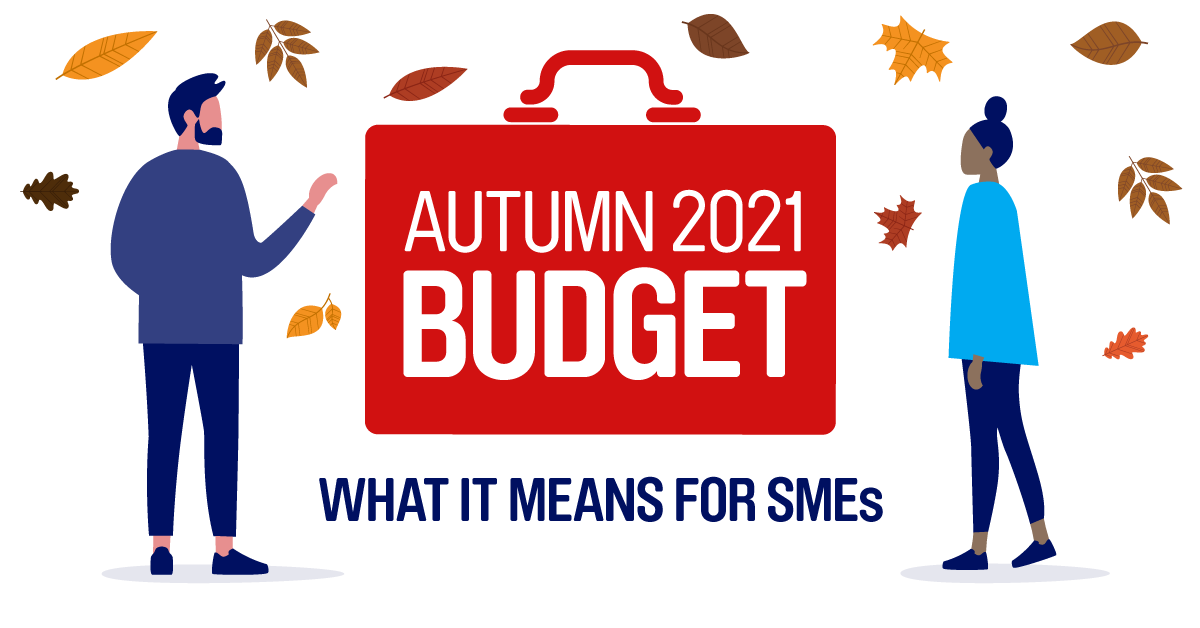 Chancellor Rishi Sunak announced his latest Budget at lunchtime today, setting out the main public spending and tax changes for the next year and beyond. He opened his speech with a strong message of positivity. Employment is up, investment is growing, our public services are improving, public finances are stabilising and wages are rising. The hope, he said, is to build an “economy fit for a new age of optimism”. In fact, the Office for Budget Responsibility (OBR) has revised their previous growth predictions to 6.5% this year, fom 4%.

The Chancellor’s main priorities focused on public services, universal credit changes and education, as well as investment in public services and a higher skilled economy. However, there was a lot in there for SMEs to take note of. We run through the main updates that might affect your business.

The Chancellor acknowledged that we face challenging months ahead, and the business world is no exception. With inflation rising, continued supply chain issues and the price of oil and gas increasing, it’s a difficult time to be running a small business. He has written to the Governor of the Bank of England to ensure that they stay on course to achieve low and stable inflation.

He was clear that backing business meant supporting the innovation and drive of our entrepreneurs. Off the back of recent haulage issues, the Treasury has extended their suspended HGV levy to 2021 and is freezing vehicle excise duty for HGVs. Sunak also mentioned the recent visa scheme to recruit HGV drivers. On the topic of immigration, he declared that he wanted to make our visa system the most competitive in the world. The Scale Up Visa will make it quicker and easier for fast growing businesses to hire highly skilled people.

Innovation and a greener future

Sunak wants to invest in innovation. As a result, the amount spent on Research and Development (R&D) will increase by 50% by the end of this Parliament, to £22 billion. On top of this, there will be R&D tax reliefs. He wants to support British inventions, discoveries and technologies that will change the world. Core science funding will be increased to 37% and the Innovate UK budget will be doubled. Currently, we spend about 0.7% of our GDP on R&D, but this will increase to 1.1%, higher than France, Germany and the USA.

The Chancellor said that he wants to support the imagination, drive and risk taking that characterises entrepreneurs and business owners. So far we’ve had the Help to Grow Scheme and Future Fund Breakthrough, but in this Budget, Sunak has gone further. There will be a £1.4 billion Global Britain Investment Fund to support life sciences research. On top of this, the British Business Bank’s regional investment fund will increase too. If your business is in science, technology or similar then these are well worth exploring.

The environment also got a healthy dose of investment in today’s Budget. Under the Government's Net Zero scheme, £30 billion has been allocated to create new Green industries of the future. The Chancellor will also be issuing a second Green Bond. London, he proudly said, is the third largest issuer of sovereign green bonds in the world.

Business rates and other tax reforms

The £1 million annual investment allowance has been extended to March 2023. Sunak didn’t go as far as removing business rates, as many industries suggested. Instead, the business rates system will be made more fair, with a reevaluation every three years from 2023. The main updates, which will decrease the amount businesses contribute in business rates by £7 billion, are as follows:

Tax relief for culture and the arts will be extended for two years, until March 2024. Galleries, museums and similar spaces will enjoy almost £250 million of relief over that time. For hospitality businesses that serve alcohol, the planned rise in duty of spirits, wine, cider and beer has been cancelled. The number of rates will drop from fifteen to just six, simplifying the process.

Local governments will get new grant funding over the next four years to spend on housing. The Chancellor has pledged to fund 180,000 new affordable homes, the largest investment in the sector to date. The government has also committed £5 billion to removing dangerous cladding on buildings. This will be financed in part through a 4% property developer levy. However, this will only apply to those with profits over £25 million.

The Chancellor’s third Budget has shone a light on what recovery could look like for the British economy. For multinationals, SMEs and startups, that means investing in innovation, funding R&D tax breaks and backing businesses to build the future. If you’d like to review the Budget in full then head to the Treasury website for all the details.

Since the Chancellor’s speech, the British Business Bank has also announced that the Recovery Loan Scheme will be extended to 30 June 2022. Find out more about how the scheme can help kickstart your recovery to match the brighter economic picture we’re starting to see here.