Okay well, not that much. But in particular, consider new entrants to the business that is ‘UX’.

I’ve been extremely lucky to have had a mentoring role in my past employment: working with new entrants into the graduate programme at Reed Business Information was the most enjoyable aspect of my job there. I saw close-up how they wrestled with forming a view on what their tool-set and skill-set should be.

It’s an always-on, ‘blink-and-you-may-miss-the-next-big-thing’ world. If a trainee designer chooses to opt-in to receiving themed news posts on Medium (or maybe aggregating UX wire services like Sidebar), within a day or two they will be under siege. A barrage of reviews, opinion pieces, articles and advice (and clickbait frankly) will be hammering down their defences, assailing them with the pros and cons of various design tools and processes.

I could pick 10 tools from the ‘Design Prototyping’ list that on the surface have similar capabilities. And use them to create ten of the UX artefacts listed above. I’ve been in the workplace now for over 20 years; so while I’m open to suggestions and do my best to keep abreast of new tool developments and processes, I’ll admit to being fairly entrenched in using a small suite of software tools to do the sort of work that I do.

If you’re an aspiring designer, you want to progress your career in a meaningful way that suits you, your skills and aspirations. Your time is precious and time for learning new skills even more so. So what do you do?

I’ve spoken to teachers in higher education that have given up teaching software skills. They told me it was impossible to keep up with new releases and often the students surged ahead – at uneven rates – of their own accord. Here’s a few thoughts on how an aspiring designer might go about forming a view on developing their craft:

Go to meetups that will enlighten. There are some great ones that are cheap or free. Some of them are online, others face to face. Some are helpfully aimed at new entrants to the design industry; Junior UX Crunch in the UK for instance. Join a UX body such as the IDF or the IXDA.

Speak to your senior colleagues if you’re in a larger organisation. Hopefully they’ll talk through what you’re trying to achieve and the pros and cons of various approaches. If they start telling you what to do, listen and learn, but accept it as somebody’s opinion then form your own view.

A UX designer in a small organisation may be an all-singing all-dancing jack or jill-of-all trades. Conducting research in the morning with a prototype they created yesterday and rattling together visual design specs based on the testing in the afternoon. They’re probably better at some of these tasks than others – and have a background in one in particular.

An identically titled UX designer in a larger organisation may be an uber co-ordinator, commissioning research with an agency; liaising with a user researcher; conducting a usability study; hand-drawing static wireframes for testing; reviewing UI design with a visual design colleague; testing a developed prototype. They may have a background in psychology or human factors design.

Different designers, same job title. Job titles are less meaningful than the employer’s expectations of what they want from the designer in that role.

Are you tasked with designing a front-end for a database-heavy financial trading interface? Or maybe a mobile app for festival-goers? Consider the types of activities and tasks the users of these services undertake – and where and when. The context of use and desired outcomes for the people using these two services probably couldn’t be more different. So you may adopt different processes for these.

Don’t consider it a prerequisite to be brilliant at everything

You’ve heard of the quasi-mythical UX unicorn right? (it’s a recruitment site but if you google UX Unicorn don’t be surprised at the results). Members of the design community who can do everything? Front-end dev. Research. UX Design. Visual design. Design design. Fantastic typography. Augmented reality. Turn their hands to anything? I think I’ve worked with two. And one of those admitted that he couldn’t flex the full range of his skills as the larger engineering team he was part of ‘didn’t work that way’. If you’ve got it in you, it will come out and you’ll make a good living. Be wary of spreading yourself too thin – there are only so many hours in the day and not all organisations need people like this.

What are the desired outcomes? Don’t lose sight of them

Not only for the people who use the products you’re doing design work on, but also the business you’re working for. Merging user needs with business requirements is part of the job. And for you as a designer: what do you want from the process?

Here’s a simple case study showing the process behind designing and developing a tool for internal use at MarketInvoice. In this example it’s a service to allow our Operations team to bulk process payments. There are two desired outcomes. The first is for the company to have the capability to process more payments more rapidly. The second is to allow our customers to access their agreed funds more quickly. 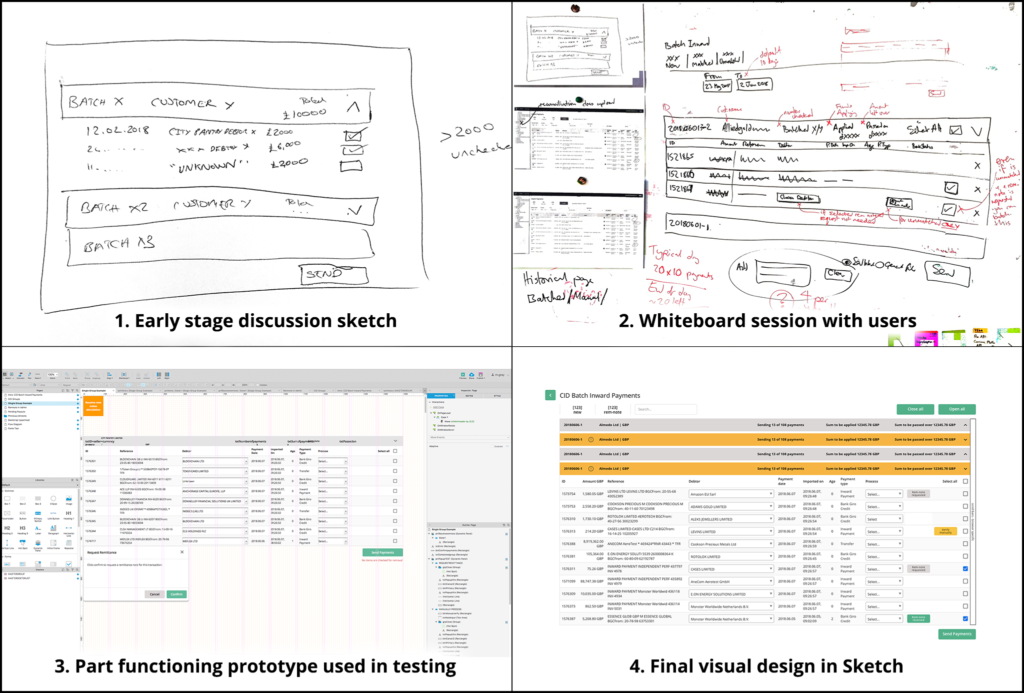 A collaborative effort between members of the Tech team (engineering and design) and the end users: colleagues in our Operations team. A very early-stage thumbnail sketch – pretty much a water cooler conversation – lead to a more expansive group sketching session around a whiteboard. This took into account the early sketch, an existing service and scoped out the desired functionality of an updated version.

On the back of this I built a part functioning prototype using Axure and tested aspects of the tool with a small group of the target users, recording the session using screen and voice capture. I shared this session around the team using Microsoft Stream, allowing myself and others to annotate the recording. The outputs and feedback from this fed into finessing the design from which we wrote users stories for development and also a final visual design put together using Sketch.

And if you’re wondering about me? I’m strong in…

I feel lucky that I’m in a position to help influence the shape, process and integration of the design function at MarketInvoice. I hope to be recruiting designers soon – look out if you’re interested. There’s work to be done. (m.gray@marketfinance.com)